Here, Paul Baer, one of the core members of the GDRs authors group reflects on the principles and prospects for the framework, and does so in the manner of the modern academy.  Here’s the abstract:

“The Greenhouse Development Rights (GDRs) Framework is a proposal for a global climate agreement in which the obligations assigned to nations are based on a combination of responsibility (contribution to the problem) and capacity (ability to pay). A key feature of the GDRs framework is that it is modeled on the assignment of a ‘right to development’ to individuals, such that individuals with incomes below a ‘development threshold’ are nominally exempted from obligations to pay for mitigation and adaptation. Obligations for those ‘over the threshold’ are calculated in the same way for rich persons in poor countries and rich persons in rich countries. As income distribution within countries is taken into account and all countries have some wealthy people, all countries have a positive obligation to contribute to global mitigation and adaptation requirements, eliminating the sharp distinction between Annex I and non-Annex I countries. In the last few years, GDRs has become one of the most widely known of the many so-called burden-sharing frameworks that have been proposed. In this essay, one of the co-authors of the GDRs framework presents the framework’s fundamental principles, describes its place in the larger discussion of burden-sharing and climate justice, and reflects on its prospects in the next phase of the global climate negotiations. Hopefully it will be helpful both to readers new to GDRs and to our existing supporters and critics.”

END_OF_DOCUMENT_TOKEN_TO_BE_REPLACED 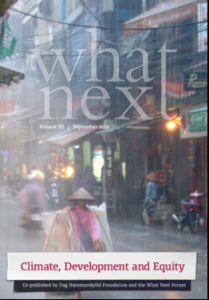 The What Next Forum in Sweden has just published a nice, up-to-date overview of Greenhouse Development Rights. Many thanks to Niclas Hällström for pushing us to put it together. Weighing in at about ten thousand words, The North-South divide, equity and development – The need for trust-building for emergency mobilization is now the best single introduction and overview of GDRs around, and we’re very glad to have it.

We’re particularly glad because this essay contains an extended discussion of how GDRs – as an “equity reference framework” – could help us navigate a trust- and momentum-building transition to the high-ambition mobilization that we so desperately need.

By the way, this new GDRs overview is part of a book-length collection of rare relevance called What Next Volume III: Climate, Development and Equity. Take a good look at the Table of Contents page.  There’s lots of excellent stuff here.

The fair-shares discussion has long percolated though the climate movement.  The drafting of an official Climate Action Network discussion paper on effort-sharing frameworks is nevertheless a bit of milestone.

This paper was written cooperatively by people from a variety of CAN member groups — including people from Greenpeace, Oxfam, and Christian Aid, as well as CAN staff and members of the Greenhouse Development Rights team.  A much larger group is following its development.  It contains a nice concise introduction, but let us add that it’s particularly notable for its principles-first approach, with which it does a pretty good job.

Note especially that only a few of the frameworks that are analyzed herein — GDRs is among them — seem capable of actually supporting both the right to sustainable development (R2SD) and a high-ambition transition.  Which, when you come right down to it, the bottom line in all this.

END_OF_DOCUMENT_TOKEN_TO_BE_REPLACED

Someday, it will be easier to make judgments about which nations are doing their share to face up to the demands of the climate crisis, and which are free riding.  Before that fine day dawns, though, two things will have to happen.  First, the national pledges of action that countries – northern and southern, large and small – have committed to deliver to the UN Secretariat, the pledges in which they lay out their emission-reduction action plans, have to get a whole lot easier to read and compare and interpret.  Conditionalities have to be spelled out, and loopholes have to closed.  Second, we have to reach at least a rough international consensus on what different countries, at different levels of development, should do, in the light of historically-informed and principle-based comparisons that take, say, wealth and responsibility into account.

In the meanwhile, we’re stuck with overly-simple approaches based on problematic metrics like, say, per-capita emissions, or rates of decrease in carbon intensity.  Or we can just embrace simplicity and compare northern tons to southern tons.  The surprising thing is that even such a simple-minded analysis as this produces interesting results.

END_OF_DOCUMENT_TOKEN_TO_BE_REPLACED

An analysis of Luxembourg’s climate obligations, in the context of a global emergency mobilization to stabilize the climate system, as informed by the Greenhouse Development Rights approach