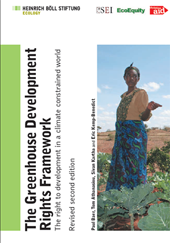 The second edition of the Greenhouse Development Rights book is now available.

The second edition of the Greenhouse Development Rights book is quite similar to the first, which was published in November of 2007.  However, it contains a number of important changes. Many are localized matters of precision and style.  But others are more significant:

The first of these significant changes has to do with our reference case projections.  Earlier versions of GDRs relied heavily on two IPCC SRES scenarios (A1B and B1).  A1B was taken as our “business and usual” case, and B1 was contrasted to it to estimate the size of the global “no-regrets” potential – the emission reductions that could be made for free, or indeed profitably.  The SRES scenarios, however, have been overtaken by events; actual emissions rates are overshooting even the most worrisome of the SRES cases.  So, following current usage, we have abandoned them and taken the International Energy Agency’s 2007 World Energy Outlook reference projection as our new BAU case.  Further, our new estimate of the global no-regrets potential is based on an influential McKinsey estimate, which is also based on the 2007 WEO reference case.

Even more critically, the GDRs system is now dynamic.  Rather than calculating our key metric,  the “Responsibility and Capacity Indicator” (RCI) on the basis of current national data (GDP, population, cumulative emissions), it calculates them on the basis of projections of those indicators, projections that are derived, as noted above, from the 2007 World Energy Outlook.  Which is not to say that we consider the 2007 WEO reference case to be unproblematic, or in any way the last word.  But, again, current usage supports its use, and it is quite sufficient to produce some intriguing and politically challenging results.

For example, there is the case of China.  In 2007’s initial static analysis of the Greenhouse Development Rights approach, we calculated that China had a 7.0 percent share of the total global climate obligation to support an emergency global climate program of mitigation and adaptation.  Today, in our dynamic calculations, that number has been replaced by a year by year series, that evolves as do China’s economy and emissions.  China’s RCI increases from 5.5 percent (in 2010), to 10.4 percent (2020), to 15.3 percent (2030), reflecting the dynamic trend that China is expected to follow over coming two decades.

We have also made several other smaller updates and changes:

•    Just after our initial (November 2007) publication, the World Bank released new income data and PPP (purchasing power parity) conversions, which revealed that earlier assessments of developing country economies were significant overestimates.  These are critical in the calculation of the Greenhouse Development Rights RCIs, and this new edition fully integrates these new data.

•    We have changed our treatment of “no-regrets” reductions.  As before, the global theoretical potential (now as calculated by McKinsey Global Institute) is allocated to countries in proportion to their share of global emissions.  However, we no longer interpret their standard definition (zero or negative cost reductions, including co-benefits) to imply that all countries, whatever their level of development, should be obliged to achieve those reductions alone.  Now, recognizing the importance of various non-cost-related barriers (e.g., structural, institutional, financial, and technological barriers) to achieving no-regrets reductions, we oblige countries to achieve only a specified fraction of their theoretical no-regrets potential.  To keep things simple, and as a reasonable if crude estimate, we require Annex I countries to achieve 100 percent of their no-regrets potential.  Non-Annex I countries, to account for the various obstacles impeding the capture of no-regrets options, are required to achieve only 50 percent of their no-regrets potential. The remainder is included in the global mitigation requirement that is allocated among countries according to capacity and responsibility. Since no-regrets mitigation potential is a relatively small fraction of the total amount of mitigation needed to reach the 2ºC trajectory, the impact of this change is relatively minor.

•    We have modestly changed the value of the development threshold, from $9,000 to $7,500, i.e. from 150 percent to 125 percent of the $6,000 per annum income (PPP) that we take as defining the global poverty line.  This lower figure was found, after further research, to be more closely consistent with national estimates (in China and India specifically) of the income level where poor people begin to enter the lower levels of the global consuming class.  Which is to say, the level where they begin to have some small amount of discretionary income.

•    We have changed the formula that we use to calculate the combine Responsibility and Capacity into a “Responsibility and Capacity Indicator” (RCI).   We now use a simple weighted sum, RCI= aC + bR, in which the weights a and b sum to 1 and are set to 0.5 and 0.5 in the indicative case.  The change simplifies things, and makes the behavior of the RCI more reasonable for outlier countries, but for most countries it changes little.

•    The calculations at the heart of the GDRs framework are now produced by a calculator that is available online.  Using this calculator, you can experiment with changes to the critical parameters, particularly the development threshold, and the relative weighting of capacity and responsibility.  We will continue to develop the calculator, adding the ability to alter the global emissions trajectory, the start date for responsibility calculations, the “progressivity” of the effective responsibility and capacity tax, and other parameters.  Go here for instructions to  access the online system.

•    Most of the charts have been rescaled to a 2030 time horizon, with special attention to 2020   Longer term projections are unacceptably problematic, and in any case we wish to emphasize 2020, which has emerged as the key near-term benchmark in climate policy discussions.

•    Finally, and significantly, our discussion of the political landscape has been significantly updated, to account for developments in Bali and since, and in particular to much more carefully analyze the sequencing problems that a framework like GDRs presents.  Simply put, GDRs is not based upon “annexes” – lists of countries with particular levels of development and, thus, particular kinds and levels of emission reduction commitments.  Rather, it is based upon a responsibility and capacity index that assigns obligations to both developed and developing countries using the same formula, arraying countries along a single scale.  Given the inertia of the current Annex structure and the lack of trust between North and South, there will likely need to be a transitional period (perhaps consisting of a short second commitment) that  builds North / South trust while, at the same time, implementing significant climate action and evolving toward a principle-based approach.   Section 6 is the place to find these changes in our political analysis.

All of these points are discussed in more detail, and footnoted, in the main body of the text.  Note, too, that other changes are also planned.  In particular, we have plans to upgrade our responsibility calculations to take account of the emissions “embodied” in international trade.